Pioneer, trailblazer, a man of firsts — they’re all good adjectives to describe Gerry Carty. The man had a list of talents, skills and hobbies that would boggle the mind. He was always busy, always enjoying himself, always making friends. 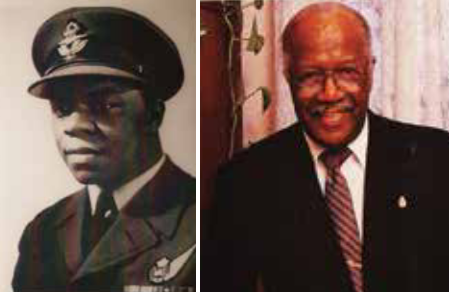 He was the first Black pilot in the Royal Canadian Air Force, and the youngest commissioned officer at 18. He flew 35 sorties over occupied territory during the Second World War.

While recovering in England from a plane crash, he studied electronics, and when, post-war, Air Canada rejected him as a potential pilot, he opened his own electronics store.

He was the first to bring cable television to Fredericton. He set up a tower in his backyard to facilitate an early communications system for the Fredericton Police Force. And with partners, he opened a charter air service in the province.

But that’s not all. He taught people to fly and helped found the Fredericton Flying Club. He was a beekeeper, Air Cadet commanding officer, musician and gymnastics coach. You could often find him at the YMCA. And he was a family man, raising four children.

It’s difficult to overstate the positive impact Gerry Carty had on his community, his province and his country...

Read the full article about Gerry Carty, a longtime member of our Cathedral congregation. The article was written by Gisele McKnight and published in the September 2021 edition of the NB Anglican.

An update from the Reverends Nelson and Kara Mejia about their ministry in Honduras. ... See MoreSee Less

The Reverends Nelson and Kara Mejia are SAMS Canada (South American Mission Society) missionaries and priests in the Diocese of Honduras. Kara Mejia is the daughter of retired New Brunswick priest Gor...
View on Facebook
· Share