The COVID-19 pandemic has created an unwelcome but unavoidable delay in construction of a three-unit, affordable housing project to be owned and operated by the cathedral. 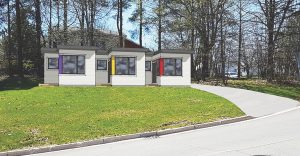 A computer rendering of the triplex of small homes that will be built on Albert Street, near Regent Street.

"The original plan was to grade the land on Albert Street and start construction last spring, so that three people would be able to move into supported housing this fall," Outreach Committee chair Penny Ericson said.

"Money has been raised in the community, the City of Fredericton donated the land and transferred the title, the design work is done, and people at the cathedral are eager to help. This type of compact, affordable housing is sorely needed by the homeless population."

Then in March the Province declared a state of emergency due to the COVID-19 health crisis, and the economy ground to a sudden and prolonged halt.

The United Way's Housing First co-ordinator Jason LeJeune explained a domino effect impacted the project on Albert Street as well as a four-unit project on Jaffrey Street to be owned and operated by another local church.

"It was really kind of death by a thousand pinpricks," LeJeune said.

When the pandemic hit, the builder of the proposed small houses, Maple Leaf Homes, shut down. By the time the business reopened, it faced a large backlog of orders and heavy demand for building materials. The closure of some municipal and provincial government offices resulted in delays for elements of the project. The two building sites need water and sewer lines installed and this type of work is backlogged, too.

LeJeune said the delay is unfortunate because the projects are designed to help some of the city's most vulnerable people at a time when the vacancy rate for rentals is extremely low. Forty townhouses, each ranging from 34 to 43 square metres, will eventually be built.

Penny Ericson agreed the work slowdown has been frustrating, but she said numerous items to furnish and equip the three townhouses have already been collected and are in storage awaiting construction next spring.

"We look forward to seeing things get back on track next year so that three people can move into their new homes in 2021," she said.

More information will be made available next year about ways in which the cathedral family might be able to help with final details for this project.