Why not connect with virtual Taizé?

Psalm 130:5 is comforting to read, but, in these strange times of self-isolation during a public health emergency, it's reassuring to see and hear someone familiar saying it aloud. That's what struck me as I listened to Rachel Schmidt sharing: “I wait for the Lord; my whole being waits, and in His word, I put my hope.” 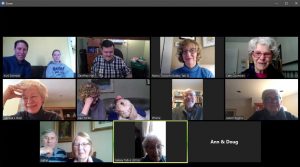 Her mother, Catherine, had just played The Lord is My Song on the piano in their home, with its oft-repeated line, All my hope comes from God. The song occurred just after Rachel's father, Kurt, had welcomed nearly 20 people from three provinces to a virtual Taizé service, thanks to a video conferencing platform called Zoom.

More people connected to the virtual service than normally visit the cathedral for a half-hour of simple, meditative prayer and music in the Taizé tradition. Through words, music and silence, participants can focus on a single, burning candle and an icon or close their eyes to listen for the voice of God.

Cath Coombes and Leith Box attended virtually from Gagetown, NB, and thanked Kurt for making it possible, calling it “lovely.” They enjoyed the peaceful, thoughtful silence which followed a reflection written by German pastor Dietrich Bonhoeffer.

Bonhoeffer referred to chapter 8 of Mark's gospel in which the disciples are urged by Jesus to take up their cross and follow Him. He wrote that each person has his or her own cross ready, appointed and measured by God. For some, the sacrificial suffering will mean martyrdom; others will not be tempted beyond their strength, but a cross will be laid upon everyone committed to Jesus.

Participants pondered this theme, then joined in the prayers of the people and the Lord's Prayer, before closing with a Taizé-style song in Spanish, Nada Te Turbe. The words are attributed to St. Teresa of Avila, which is in Spain, a country whose citizens are currently being ravaged by COVID-19. 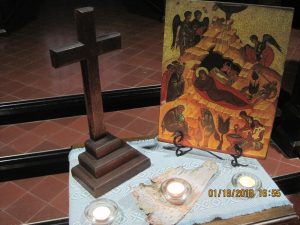 The translated lyrics are uplifting in these stressful times: “Let nothing disturb you, let nothing frighten you. All things are passing away. God alone is sufficient.”

Retired bishop Bill Hockin and his wife Isabelle have attended in person previously, but found the virtual service – necessary because of social distancing rules laid down by the chief medical officer of health – very well done.

Isabel and Nathan Cutler, former cathedral members who now live in Newfoundland and Labrador, signed on and found the service “beautiful,” adding they hope to take part in future weeks during Lent through “this great tool.”

Kurt plans to offer virtual Taizé on future Thursdays during Lent. Instructions for how to sign on to the Zoom meeting will be posted on the cathedral calendar and Facebook page the day prior. A person with a web camera or a forward-facing camera, as well as a microphone, will get the most out of the technology. But a reliable Internet connection will get you there, too. Even if you cannot be seen or heard, you will see and hear everything that is happening.

NB Anglican editor Gisele McKnight has launched a series called "What Have We Learned" regarding the past six months living under pandemic conditions.

The aim is for answers to encompass mostly church life and how that has affected you, but could also include personal epiphanies, mental health issues and the like. As long as they are relevant to your life as a Christian, she is interested in hearing from you.

This series, assuming there is enough feedback, will be ongoing throughout the fall. The next deadline is Sept. 25.
Send to <gmcknight at diofton.ca>. Please write economically and try to limit your answer to 300-400 words. ... See MoreSee Less

Help revitalize Camp Medley with a donation towards re-seeding the field! Watch the video below and visit the link to donate. ... See MoreSee Less