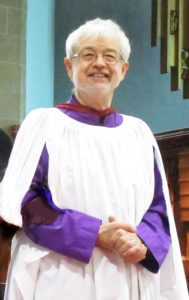 The church family at Christ Church Cathedral continues to mourn the death of organist and director music David Drinkell.

Notes of sympathy and condolences, literally from all over the world, continue to flow in. David was very well known and regarded in the music community. Among the communications are those from Brunswick Street Baptist Church, Fredericton,  the Organ Club (UK) and Belfast Cathedral where they have posted a memorial to David. David's previous post was as organist at the Cathedral of St. John the Baptist, Diocese of Eastern Newfoundland and Labrador in St. John's. The Fredericton Daily Gleaner, published a story about David this week. A tribute in the November edition of Anglican Life (Newfoundland Dioceses') by Ashley Ruby, page 11 -- "An Increased Richness in Heaven."

David made the music in Cathedral worship seamless

As a Cathedral member put it this week, "David made the music in Cathedral worship seamless." Indeed, he did. His knowledge of traditional Anglican worship and its music often baffled the best of us, yet he met the challenges of more contemporary musical styles in leading the 11:45 a.m. worship group each Sunday with grace and proficiency. Let us give thanks for his confidence in Christian faith. We are indebited to him, perhaps most for his friendship, but also for his faithful, yet far too short, ministry of music among us.

Later in the day on Thursday, 26 September 2019, the Dean wrote to the Cathedral congregation by way of email:

It is with sorrow and a heavy heart that I write with very sad news.

You’ll remember that David Drinkell had, what we all considered, a successful emergency surgery last week. Early in the day on Sunday, it was becoming more apparent that complications from the surgery were developing and Sunday afternoon, David underwent a second surgery to address those difficulties. 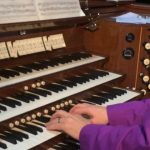 Since Sunday, David had been in ICU, on life support and, his condition continued to worsen. Medical tests and scans on Wednesday were not revealing good news about his chances for recovery. Earlier today (Thursday) it was determined that chance had become very slim, if not non-existent. At about 5:30 p.m., life support was removed and David died peacefully at about 7:20 p.m..

It was my privilege that Elspeth allowed me to be present. Kathleen Snow and Janet Mahar were also with us. The care David received from the whole health team at the Everett Chalmer’s Hospital was outstanding and we are all thankful for them. Everything possible was done. Thanksgiving is also due for all who have helped in any way over the last several difficult days, perhaps most especially Marilyn Lewell who has been a rock for Elspeth through much of this ordeal.

Most of us are very conscious of the precarious financial position this creates for Elspeth. There may be opportunities, for those whom are able, to offer support in a financial, as well as other many ways, in the days ahead. We’ll try to coordinate that as best we can and further direction should be forthcoming. 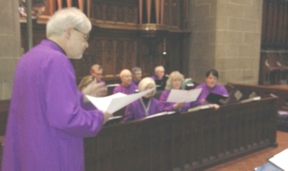 Please pray for David, Elspeth, other members of David’s family and friends who will be hearing this news shortly.

"Lord, now lettest thy servants depart in peace, according to thy word."

David's funeral will be at 2:00 p.m., Tuesday, 08 October 2019, at Christ Church Cathedral, Fredericton. There will be no visitation prior to the funeral. Long time friend, Anglican priest and Rector of the Parish of Rothesay, the Rev'd Paul Rideout, will be the preacher. Friend of the Cathedral and former director of music, Dr. Willis Noble, will be the organist. A reception at the Cathedral Memorial Hall will follow.

2 thoughts on “In Memoriam – David Drinkell”

2 thoughts on “In Memoriam – David Drinkell”