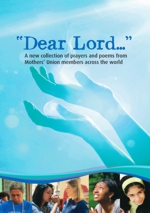 The Central Fundraising & Communications (F&C) Committee of Mothers' Union has produced a new prayer book for its members - 'words for every occasion to encourage and inspire, whether in public services, branch devotions or personal prayer time.'

This is the story of the little team that could! God gives us more than we can ask or imagine.

In my role as a member of the Central F&C Committee, I attended our initial meeting in May of 2016 which was held in Derbyshire. The goal of this first meeting was to discuss ideas about what the committee could do to raise funds for the worldwide Mothers' Union while at the same time enhancing communication with its members. The suggestion of producing a new Mothers' Union prayer book as an income-generator as well as a resource to our members was discussed.

The Prayers We Breathe prayer book was and is a wonderful resource; I have used it often over the last 20 years for both personal and corporate prayer. We suggested producing a new book of prayers written by MU members from all over the world. We were excited about the notion, and several members of the committee were quite enthusiastic about the project.

God gives us more than we can ask or imagine.

The F&C Committee meets 3 times annually; we meet in person once a year, and the other meetings are held via Skype. In late May of 2017 we met again in person and the idea of the prayer book was discussed again. Three of the members - Mari Thomas (Wales), Moira Thom (Northern Ireland) and I were keen to put our time and effort into the project. We were given approval by the committee to proceed and off we went! Our little team of three was on its way.

Last June we contacted Mothers' Union members from around the world via email with the assistance of Mary Sumner House. We invited them to submit prayers, and suggested topics to them for the prayers. We were hoping to receive 100 prayers for the book, and gave the members one month to submit them. We received feedback that this wasn't enough time, and doubt was expressed that the prayers would come in, but we received well over 350 prayer submissions. Mothers' Union members love to pray and they love to write prayers!

Mothers' Union members love to pray and they love to write prayers!

Mari, Moira and I met almost every Monday morning via Skype from June to December to receive, acknowledge, compile, edit, and work with our Committee Head Daniel McAllister and MU Trustee Jocelyn Wright to produce the book. A special thank you to Ethel Nelson and Dawn Skene for their eagle eyes in reviewing the prayers, and to Catherine Kyte from Mary Sumner House for her review and edits as well.

This new prayer book contains over 150 prayers and poems written solely by Mothers' Union members. It can be purchased for £3 plus postage by contacting Mothers' union <NewPrayerBook at mothersunion.org> or buy online Dear Lord Prayer Book.

It has taken a lot of time and effort to produce this book in just eight months. Our goal was to launch it at the Worldwide Council meeting in early February and we have met our deadline! The meetings and project have been covered in prayer, and all I can say is that our God is a great God who can make all things happen!

With every blessing, and thank you to all who have submitted prayers. There may be another book to come!