England, Scotland, Indonesia, Bali, Ireland, New Zealand, the Philippines, and a Bible Study tour of the Middle East. That’s a list of a few of the places that Janet Mahar, the secretary of Bishop and Chapter, has visited and/or worked in over the past 34 years!

Janet grew up in Lincoln NB and graduated from the Devon Park Christian School. She was raised in the Baptist faith. After graduating from the University of New Brunswick with a degree in biology and worked for 2 summers at the Huntsman Marine Station in St. Andrews. Janet spent some time working in a lab in Liverpool, England and visiting Scotland.

Shortly after leaving the UK, Janet accepted a position teaching biology in an international school in Indonesia. In this environment, Janet found herself overwhelmed by the work and found it difficult to find the time or energy for church, or a Christian Church that didn’t follow what is known as the “Health and Wealth Gospel.” She taught in Indonesia for 3 1/2 years. 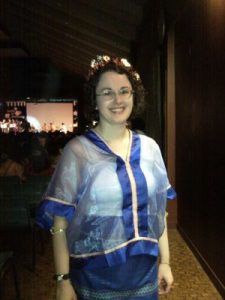 Janet in 2010, wearing a traditional costume from the Indonesian province of Sulawesi for Cultural Night

In 2011, Janet returned to NB and, seeking a new career, enrolled in a Pharmacy Technician course in Moncton in 2014. She attended a Baptist Church there until, wanting to try a different denomination, she attended the Palm Sunday service at an Anglican Church in Moncton where Bishop David Edwards was speaking. Coincidentally, it seemed, when Janet returned to Fredericton for Easter and attended the Good Friday service at Christ Church Cathedral, who should be there but Bishop David Edwards. Janet says that seeing Bishop David at the 2 services in 2 cities in 1 week was a connection for her, and it seemed to be a confirmation of where she should be.

She has been a part of the Cathedral congregation since graduating in June 2015. While participating in a Lenten Study last year, Dean Geoffrey Hall asked if she would be interested in taking on the role of secretary for Bishop & Chapter. Janet saw this as an opportunity to serve and gain more knowledge and experience of the Anglican faith. She is also a member of the Adult Choir and the Server’s Guild. Janet prefers the traditional 10 AM Eucharist. She says she “loves the words that have stood the test of time” in the liturgy.

Janet currently works as a Pharmacy Assistant at the DECH and is working towards her registry as a Pharmacy Technician. She has an older brother in Fredericton, and her younger brother and Mom still live in Lincoln. Janet’s Dad, John W. Mahar, the owner of Topmar Building Supplies and a well-known Fredericton businessman, passed away 9 years ago as the result of an accident.

We are fortunate to have Janet as a member of our congregation and serving the Bishop & Chapter. As one who is so skilled in taking, as she was told, “minutes not hours,” she is appreciated for her excellent work!