The first Bishop of Fredericton is perhaps best known for the establishment of the Anglican Diocese of Fredericton, the building of its Cathedral of Christ Church and many other churches throughout New Brunswick. Medley supported free pews, free-will offerings and the development of diocesan synods. He was the author of Hymns for Public Worship in the Diocese of Fredericton (1855, 1863, 1870). 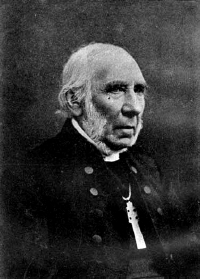 It may be unknown to some that Bishop Medley’s interests and skills reached far beyond being a recognized scholar, gifted preacher, priest and Bishop. Among the skills that would reach deeply into other areas of church life were his musical abilities. During the early years of the Fredericton Cathedral, Bishop Medley was the primary preacher, director of music and chief pastor. His contribution to church music during the later half of the 19th century was significant.

“…undoubtedly [Medley was] the most prolific and talented anthem composer of post-confederation 19th century Canada,” Dr. Willis Noble, Director of Music and Organist at Christ Church Cathedral said. He is credited with several chant tune compositions, anthems and responsible for the introduction of the first Diocesan Hymnal in 1855. 1 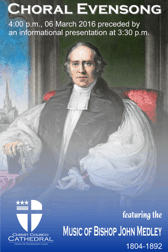 Prior to his becoming Bishop, several tragic domestic occurrences included the death of his second son in 1839, his wife in 1841, his oldest daughter in 1843 and his mother in a carriage accident in 1844 in which Medley himself was involved but survived with injuries. It was in the fall of 1844, that the then Archbishop of Canterbury wrote to the Rev’d John Medley, then prebendary of Exeter cathedral:

REVEREND Sir,
It has been determined to separate the Province of New Brunswick from the Bishopric of Nova Scotia, of which it now forms part, and to erect it into an independent Bishopric.
It is most desirable that this important station should be filled by a clergyman well qualified by learning and ability, by temper and judgment, by piety and soundness of doctrine, to discharge its arduous duties.
I have been informed by competent judges that you possess these qualifications in no ordinary degree, and their report has been fully confirmed by the answer of the Bishop of Exeter to my inquiries. I therefore request your permission to mention your name to Lord Stanley as Bishop.
The office is not to be coveted on account of its emoluments … 2 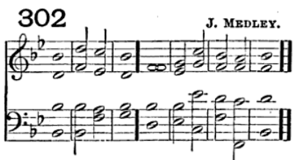 Among the Medley selections scheduled to be sung on 06 March are:

A verbal presentation on the life, theology and music of Bishop Medley will precede Evensong at about 3:30 p.m..

1. Harding, Lyman N., Citizens with the Saints, 1995
2. Ketchum, William Quintard, The Life and Work of the Most Reverend John Medley, D.D.: First Bishop of Fredericton, 1893