Spaghetti Tuesdays meets weekly through the College and University academic year, providing a place for young adults (and their children) to gather in a no-strings-attached positive and welcoming community.  Since getting underway in February 2015, the program has stabilized with typically 25-30 people each week joining at 6:00 for a meal in the Cathedral Hall.  Some participants attend one of Fredericton’s various post-secondary institutions, others are young professionals, others yet are stay-at-home parents.  Some attend the Cathedral or other Anglican parishes, while others attend other denominations … or have no religious connections.   We eat our way through about 2 kilos of pasta, nearly 4 litres of sauce, and 1 ½ heads of lettuce each week! 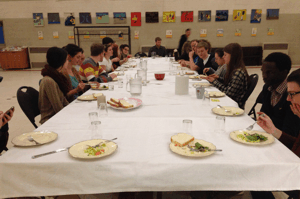 The crux of Spaghetti Tuesdays is that it is a welcoming entry point.  An entry point into a community which has self-selected around positive community traits, often in contrast with other communities available to people at this time in their lives.  People aren’t required to drink, to do specific activities, espouse specific beliefs, or construct one’s identity, sexuality, relationships in particular ways.  All they need to do is show up, have a meal, and take a step in building a positive network.  This is a unique, risk-free place, which has formed close bonds among new friends while strengthening bonds among existing ones.

Particularly since the Fall, Cathedral members have stepped up to support the group.  Some have come to help in the kitchen, preparing and serving the meals on Tuesday nights.  Others have prepared sauce, desserts, salads for the group, dropping them off in time to be used.  The impact has been subtle, but very real.  Incrementally, our “eaters” have started to see that the boundaries of the community reach beyond themselves, beyond the adults who helped get the project underway.  They are confronted by the fact that they’re physically, tangibly supported by people they’ve never met, they’ve never spoken with, yet who care about them[ the taste of what’s on their plates doesn’t lie.  It has nudged some to re-think what the Church is about and for … because something’s missing.  Nobody’s hollering at them about sex or judgment, nobody’s pressing for money or trying to impose social control.  Instead, folks just share a meal, and in the process take some faltering attempts at taking care of each other.  Without waiting to be thanked, and sometimes without even knowing who to thank. 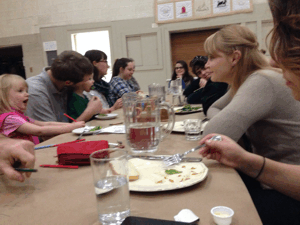 Perhaps not incidentally, the Bishop’s Court community has seen a modest uptick in participation at Bible Studies, with crossover from a few among the Spaghetti Tuesdays crowd.  Conversations ‘round the Spaghetti table have turned a little more frequently of late to faith issues, to personal support.  To identifying where God seemed to be this week in people’s lives.  We need to be cautious – the mission and mandate of Spaghetti Tuesdays is not to become a study group, or a prayer circle.  It is to remain an unthreatening and risk-free entry point and shelter for people at a particularly vulnerable point in their lives – to be able to welcome new eaters, as well as the regular crowd.  To model and demonstrate love to folks that we CCC members don’t have some formal societal obligation or vested interest in having to love… 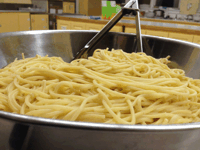 … and to leave a place at the Table for the Holy Spirit.  Who when honestly invited … really does bless the food to our use, and us to his service.