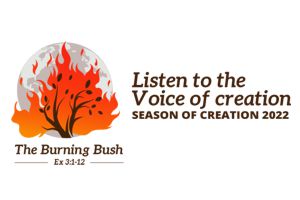 During the COVID-19 pandemic, many have become familiar with the concept of being muted in conversations. Many voices are muted in public discourse around climate change and the ethics of Earth-keeping.

The burning bush is the Symbol for the Season of Creation 2022. Today, the prevalence of unnatural fires are a sign of the devastating effects that climate change has on the most vulnerable of our planet. Creation cries out as forests crackle, animals flee, and people are forced to migrate due to the fires of injustice. On the contrary, the fire that called to Moses as he tended the flock on Mount Horeb did not consume or destroy the bush. This flame of the Spirit revealed God’s presence. This holy fire affirmed that God heard the cries of all who suffered, and promised to be with us as we followed in faith to our deliverance from injustice. In this Season of Creation, this symbol of God’s Spirit calls us to listen to the voice of creation.