November 18th was the Feast of Saint Hilda. Members of the Cathedral congregation will recognize Saint Hilda’s name, through our connection with St. Hilda’s Anglican School in Belize. 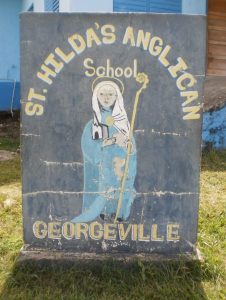 Mission groups from Christ Church Cathedral have travelled to Belize five times: in 2005, 2007, 2010, 2013 and 2018, and through these trips, bonds have been formed with the staff and students of St. Hilda’s, an elementary school in the rural village of Georgeville. Two hundred children attend the school, ranging between kindergarten and grade 8. Over 60 Cathedral members ranging in age from 15 to 79 have gone on a mission trip to Belize, and hundreds of people in Fredericton have supported the work through organizational support, donations and prayers.

To commemorate the life and work of Saint Hilda, at the worship service in the Cathedral on November 18, Canon Patricia Drummond shared these words.

Hilda was born in 614 A.D.  She was a daughter in a royal household at the time when England had different royal families in various areas of the country.  She was baptised a Christian at 13, but lived a secular life for 33 years.  Then she became a nun.  In 657 she was appointed the founding abbess of Whitby College and remained there until she died in 680.  She followed strict ideals of monasticism - all property and goods were held in common, peace and charity were considered especially important, and everyone must study the Bible and do good works.

Hilda had a lot of wisdom and energy, and was a very skilled administrator and teacher.  Kings and princes often asked her for advice.

St Hilda is the patron saint of the National Cathedral School for girls in Washington, D.C.   Hers is also the name given to St Hilda's College in Oxford, established for female students, but now a college for both men and women.

For the last 7 years of her life Hilda was sick.  She died on November 17th, 680 at 66 years old.  In those days 66 was considered an advanced age. A man living nearby claimed he saw her soul being taken to heaven by angels.

St Hilda was an excellent example of someone who, as in St Paul's letter to the Ephesians (4:1-6), which was read earlier, lived a life worthy of the calling she had received, with humility, gentleness and patience, bearing with others in love.

Learn more about Saint Hilda in this video from the National Cathedral in Washington, DC. Canon Dana Corsello speaks enthusiastically about St. Hilda during the morning prayer service (approximately between the 5-and-11-minute marks). She calls Hilda "a ray of light during the Dark Ages," referring to her as brilliant and as a strong proponent of Celtic spirituality. She was a princess in Britain before becoming an abbess, teacher and peacemaker. There is a school for girls situated at that cathedral, which is named after St. Hilda.

When the women in our newly formed Bible study faced a series of tragedies, we suddenly found ourselves sharing deeply personal experiences. Facing the loss of a father, the pain of a wedding annivers...
View on Facebook
· Share

Adoratio ~ Don't miss the chance to slow down and pray for the world on Friday evenings through Advent. 5:30-6:00pm in the Lady Chapel of the Cathedral. Simple & brief, contemplative prayer in the Celtic tradition. No prep or supplies needed -- just show up!Learn more about drop-in Advent programming: cccath.ca/2022/11/18/choose-your-own-advent-ure-2022/ ... See MoreSee Less

Join us this evening in the Cathedral (and via livestream) for the next weekly Taizé Thursday gathering of our ADVENT-ures 2023 series. This week we encounter that towering figure of Advent, John the Baptist, and reflect on the revolutionary peace that he helped -- and helps -- us prepare for. We will gather in person at 5:30pm in the Cathedral (we are rotating between Zoom and in-person sessions). Tonight's Taizé session will also be livestreamed through the Cathedral YouTube channel: www.youtube.com/ChristChurchCathedralFredericton/Learn more about ADVENT-ures devotional programming, much of which is drop-in, so feel welcome to attend anytime! cccath.ca/2022/11/18/choose-your-own-advent-ure-2022/ ... See MoreSee Less