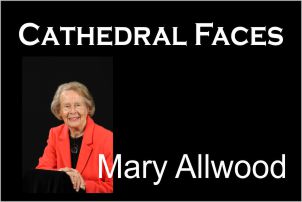 Mary Allwood lives in a comfortable Fredericton home and approaching (October 2017) it is decorated for Fall with beautiful wreaths on the doors, flowers and bunches of Autumn leaves in a container.

Mary is well known at the Cathedral as she is often the one who organizes or helps to cater the many receptions held in the hall for clergy, funerals, or special events. Mary is famous for her roast beef and Yorkshire pudding which she has served the Cathedral Guild of St. Joseph (Holy Joes) and guests for many years. One can always depend of having crustless sandwiches at receptions, especially rolled asparagus ones, when Mary is involved!

Mary comes from Woodstock, NB. After four years at Mount Allison University, Mary studied to be a Medical Technologist in Saint John, and worked at the Saint John General Hospital. While there she met Bill while playing badminton, and they were married in 1951. Together, they have lived in Fredericton (with a period of seven years in Moncton), and raised a daughter. Mary is now the proud grandmother of two wonderful grandchildren, and one great granddaughter, Zoe, now three years old. Fortunately, all live in Fredericton, and they get together once a week for a family dinner.

Mary assists at the Cathedral in more than the kitchen – she is a member of the Cathedral Matters, and has beautiful handwork to show for it. For many years, Mary led a group of Brownies at the Cathedral Hall, and happily recalls some of the group who have now grown up.

This charming, remarkable lady was also inducted into the City of Fredericton Sports Wall of Fame last year at the Delta Hotel. Her photo still graces the walls there. This special honour recognizes Mary’s contribution to the game of Curling over 64 years. At the age of 92, Mary continues to curl. Now she calls it ‘stick curling’ where one pushes the rock with a stick, but it is tricky, because no brooms are used. She has represented NB many years at the National Senior Curling Championships and twice brought home the bronze medal. She was a Charter member of the Capital Winter Club and acted for several years as President of the Ladies section. In 2003, her rink won an “eight ender,” something not many curlers can boast about.

Mary has owned a beautiful cottage at Maquapit Lake in New Brunswick for many years, and annually helps to host a BBQ breakfast and also an auction to raise money for the local fire department. She frequently entertains large numbers both at her cottage and in her home.

Mary is always ‘on the go,’ works in her garden, plays bridge, does some travelling with the Cathedral Rug Hooking group and enjoys her family. When asked if she has ‘words of wisdom,’ she says, “Just keep busy.” She certainly takes her own advice. 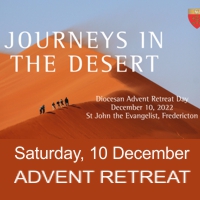 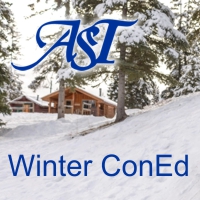 REVERSE ADVENT CALENDAR - Demand is up and donations are down at the local food bank, so the organizers have come up with a fun idea to stimulate donations of non-perishable goods. It's a reverse Advent calendar with a specific item to collect each day during Advent. This is what a completed box can look like. Maybe neighbouring families or members of groups and committees at the cathedral could combine forces to fill a few such boxes this season to help needy families. The list of items is available on the Greener Village Facebook page. ... See MoreSee Less