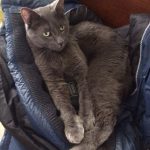 They both come from suburbs of Birmingham , England, and met while working at the University of Birmingham. Michael was a Research Technician with the Bio-engineering Department, and the University of New Brunswick recruited him to join their Engineering faculty here.  Michael came out first to scout the idea, and then promptly proposed marriage to Carole long distance over the phone! They were married within two months after that call, in 1970, after previously being engaged for four years. 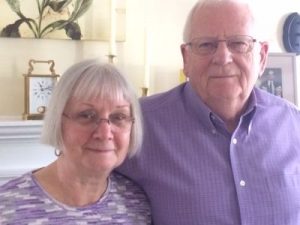 When first in Fredericton, they attended St. John's Anglican Church in the Parish of Douglas and Nashwaaksis on Fredericton's north side, where they lived. After several moves, and settling on the south side of the river, they came to the Cathedral, drawn there by an ALPHA course [read about ALPHA here]. There they met new friends, among them Isabel Cutler, who was most welcoming, so they stayed!

Carole and Michael have one daughter, Samantha, and one granddaughter, Willow, who live in Nova Scotia. They remain a close family and are together as often as possible.

When Dean Keith Joyce and family moved from the Deanery about six years ago, Odell House was deteriorating rapidly because of its age and because it had been sitting empty for almost a year. There was great concern about the future of the building, especially if it remained unoccupied. The Hines’, feeling directed by God, their appreciation of historical buildings and a desire to hopefully be of help, volunteered to live there, and care for the building and garden until decisions were made about the house's future. In the past six years, they have made many improvements to update and brighten the interior. Bishop and Chapter directed that exterior repairs needed to be made by replacing the roof and by carrying out repairs on the veranda and porch this past summer. The Lychgate was designed, made and installed by a close friend of Michael's. The garden has also been re-shaped and revived (after previous hard work done by Nathan Cutler), hopefully for the enjoyment of all. 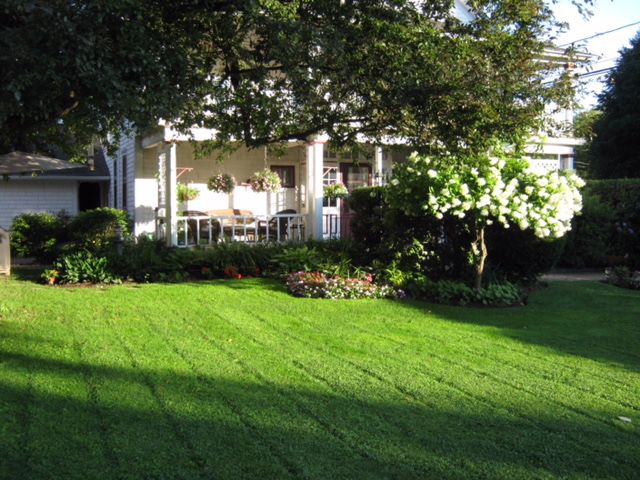 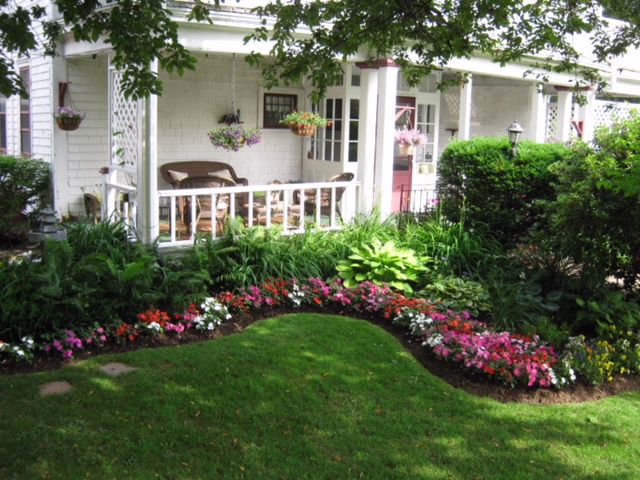 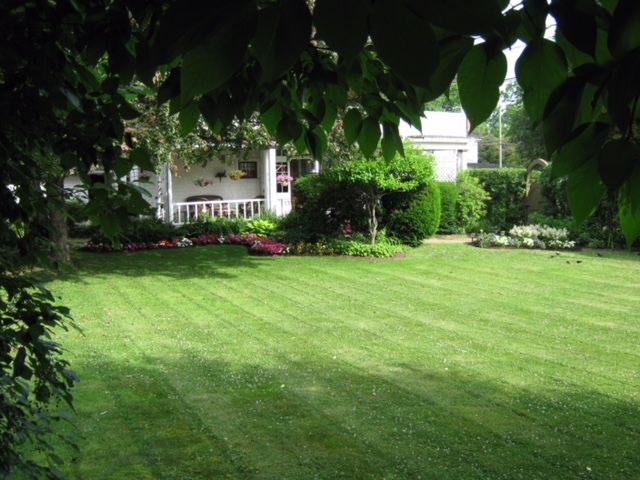 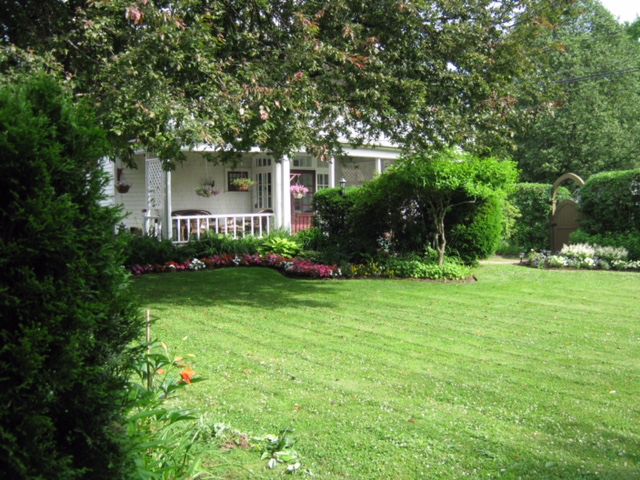 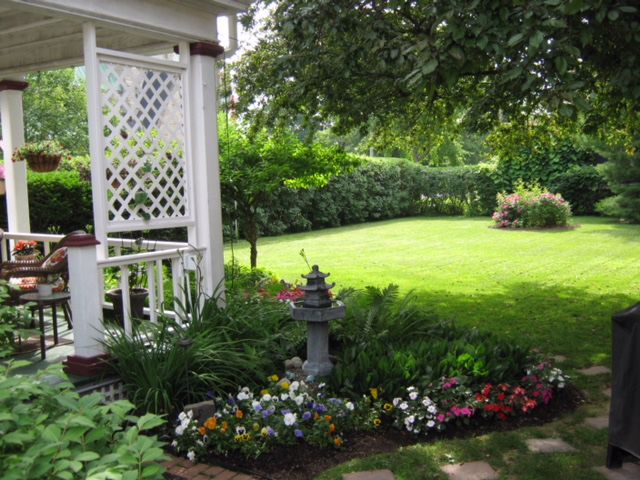 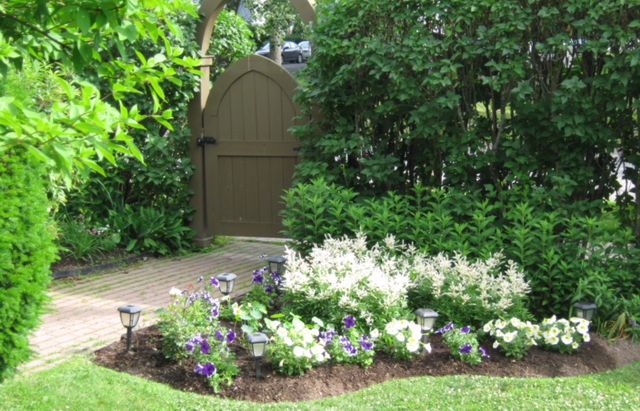 Gardening is Michael's hobby, and he does it well. Winter seems long and he is anxious to return to his garden.

He has also been a member of Rotary (held the position of President for both the North and South Side Rotary Club (not at the same time!), directed and participated in the maintenance of  Camp Rotary at Grand Lake for fifteen years, is a Freemason, and is an active member of the Guild of Saint Joseph at the Cathedral. Michael is also an ardent Toronto Maple Leafs Hockey fan, and even sported an authentic Leaf jersey with "HINES" prominently printed on the back!

Gardening is Michael's hobby, and he does it well.

Michael had a quadruple bypass in Saint John three years ago, but it didn't slow him down for long. He has been able to pass along the wisdom from that experience to other members of our congregation to try to help them through a similar situation, as others had helped and supported him.

Both are so willing to help whenever possible. When asked if they would pass on any "words of wisdom," they suggested that if you want to meet people and make friends in a new country, city or church, just volunteer, become active and join clubs that interest you. You will be glad you did! We are certainly pleased they joined the Cathedral family. 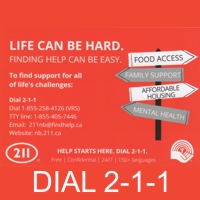 When the women in our newly formed Bible study faced a series of tragedies, we suddenly found ourselves sharing deeply personal experiences. Facing the loss of a father, the pain of a wedding annivers...
View on Facebook
· Share

Adoratio ~ Don't miss the chance to slow down and pray for the world on Friday evenings through Advent. 5:30-6:00pm in the Lady Chapel of the Cathedral. Simple & brief, contemplative prayer in the Celtic tradition. No prep or supplies needed -- just show up!Learn more about drop-in Advent programming: cccath.ca/2022/11/18/choose-your-own-advent-ure-2022/ ... See MoreSee Less

Join us this evening in the Cathedral (and via livestream) for the next weekly Taizé Thursday gathering of our ADVENT-ures 2023 series. This week we encounter that towering figure of Advent, John the Baptist, and reflect on the revolutionary peace that he helped -- and helps -- us prepare for. We will gather in person at 5:30pm in the Cathedral (we are rotating between Zoom and in-person sessions). Tonight's Taizé session will also be livestreamed through the Cathedral YouTube channel: www.youtube.com/ChristChurchCathedralFredericton/Learn more about ADVENT-ures devotional programming, much of which is drop-in, so feel welcome to attend anytime! cccath.ca/2022/11/18/choose-your-own-advent-ure-2022/ ... See MoreSee Less