One of the artifacts identified in preparing the inventory of the Cathedral Vault in 2004 was Bishop Kingdon’s “traveling altar.” It could be called “portable” except that it is a significant weight when folded up. Once set up it is intriguing. It would have been used by him or perhaps other traveling clergy in situations in the Diocese where there was no church and was probably used in a private residence or a (church or community) hall. Photo 1 (by Nathan Cutler) shows the entire altar “boxed up” and in its metal case. 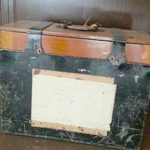 There was a metal top to the case and all is held in place by a leather strap. In the photo, is it difficult to read on the side but on the large piece of white paper it has the bishop’s name and simply “Fredericton.” The City of Fredericton at that time was still small enough that even the street address was probably not needed.

Photo 2 shows it all unfolded, although not set up for eucharist. Photo 3 displays the chalice and paten covered (in this case) by the veil and pall. 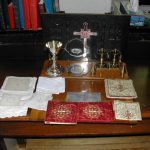 The box that is formed by the altar itself opens up in a forward direction so that the section seen whereon the chalice and paten are resting is the bottom and the area whereon the red and white veils and palls are sitting would be the front of the box. Notice the altar cross is built into the wood of the back. During this time the priest would have presided in an “eastward celebration” (with his back to the congregation). There are two candlesticks with the original candles in a metal box that also folds into the set as well as two small vases. Original flowers not found! The grey area underneath the red veil and pall is the altar stone. 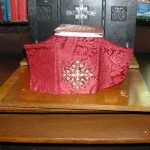 The many pieces of white linen include purificators, veils and corporals and there is also an actual “fair linen” (table cloth) which would have covered the altar itself as seen on the altars in churches of modern times.

[Hollingworth Tully Kingdon, John Medley’s hand-picked successor, had spent some eleven years standing in the shadow of the aged metropolitan. He was often excluded from the full exercise of his office—largely, in Kingdon’s own view, as a result of the interference of Mrs. Medley, who was so jealous of her husband’s prerogatives that Kingdon was to describe her as “a regular Mrs. Proudie with a vengeance.” During her husband’s declining years, Margaret Medley had denied Kingdon access to diocesan correspondence and, it appears, attempted to administer the diocese with no reference whatever to the coadjutor. For a man described as possessing “marked executive ability” who insisted that “…all the business of the Church must be transacted in legal and business-like methods,” this situation must have seemed intolerable. Reference has already been made to the troubled relationship between the Medleys and Bishop Kingdon. Kingdon had discouraged attempts to force Medley’s resignation, as “…the attempt would only make my position more unbearable, as it would increase the suspicious jealousy which exists.” Consequently, he wrote to his friend Bishop Blyth of Jerusalem, “I am afraid that the Church is not thriving here so well as I hoped, or so well as I could wish—it is terribly uphill work.”]  from “Citizens with the Saints,” Lyman N. Harding 1994.

After ten-year-old Chelsea received an elaborate art set, she discovered that God used art to help her feel better when she was sad. When she found out that some kids didn’t have art supplies readil...
View on Facebook
· Share

For Throwback Thursday #TBT, we're looking back at the 2018 mission trip to Belize, where our team continued strengthening relationships with teachers and students at St. Hilda's Anglican School. Christ Church Cathedral provides financial support to the school each year, as well as offering a scholarship program for students requesting help with high school tuition. You can help with this important mission at any time, using your offering envelopes or by making a donation online: cccath.ca/give-now-using-canadahelps/ ... See MoreSee Less

J. I. Packer (1926–2020), in his classic work Knowing God, spoke of four well-known believers in Christ whom he called “beavers for the Bible.” Not all were trained scholars, but each one exerci...
View on Facebook
· Share