In the Spring of 2009, I travelled with Bishop Bill Hockin to St. Gertrude’s Roman Catholic Church in Woodstock, N.B.  As we arrived, we noticed the parking lot was full.  Upon entering the church, we found a large, ecumenical audience awaiting the introduction of Fr. Ronald Rolheiser.  He spoke all morning, and related effortlessly with his audience. As he shared intriguing personal anecdotes and recounted stories from his own life-experience, Rolheiser emphasized the deep desire of many people for an authentic relationship with God.  He called it a “holy longing.” 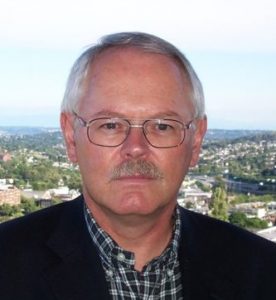 Earlier that week, in Fredericton, Rolheiser had been the recipient of an honorary Doctor of Letters degree from St. Thomas University. He also delivered STU’s Spring 2009 Convocation Address.

In 1982 while living and studying in Belgium, he began to write a regular column in the Canadian newspaper, The Western Catholic Reporter.  These columns featured reflections on theological, Biblical and secular issues.  Choosing to call his column, In Exile, Fr. Ron wrote:

All of us live our lives in exile. We live in our separate riddles, partially separated from God, each other, and even from ourselves. We experience some love, some community, some peace, but never these in their fullness. Our senses, egocentricity, and human nature place a veil between us and full love, full community, and full peace. We live, truly, as in a riddle: The God who is omnipresent cannot be sensed; others, who are as real as ourselves, are always partially distanced and unreal; and we are, in the end, fundamentally a mystery even to ourselves.

Rolheiser’s weekly columns offered down-to-earth observations connecting theology, church history, The Bible and contemporary issues.  Since its inception 34 years ago, 2000 commentaries have been posted online, each  approximately 850 words in length.  Currently, Rolheiser’s work is carried in over 80 newspapers worldwide.  At once, provocative and pastoral, his writing explores key themes in Christian spirituality, including the Trinity, World Religions, Christianity and Ancient and Medieval Philosophy, Existentialism, Mysticism, contemporary spirituality tied to the pressing questions of today (ecology, feminism, masculine spirituality, cultural change).

His 2014 book titled Sacred Fire: A Vision for a Deeper Human and Christian Maturity (Image Book, Random House) received the highest award for a hardcover book from the Catholic Press Association. His 1999 book, The Holy Longing: The Search For A Christian Spirituality (Doubleday, New York) is considered by many to be a modern classic.  Rolheiser writes for a diverse ecumenical audience.  But his weekly on-line columns may be less well known to non-Catholic readers. His website, Ronald Rolheiser’s Column Archives offers an engaging collection of short articles suitable for either personal reflection or for educational reading on Christian topics and issues.  The website includes a Search function which allows  readers to explore a wide range of topics. For example, here is a selection of just 15 titles from the 2016 column-archives: 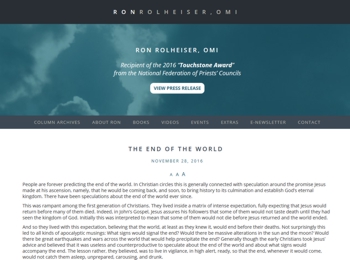 May 30, 2016 – Ordinary Goodness and our Spiritual Journey