The Cathedral Pewtersmiths officially ended their long association at the Cathedral in June 2016, with the presentation of a cheque to Dean Geoffrey Hall. President Charles Davies was pleased to present $11,896.13 during the Guild of St. Joseph summer BBQ event on June 9th,.2016 This  represented the final installment of the more than $120,000 the group has donated over the years to the Cathedral Restoration Fund.

The Cathedral Pewtersmiths began in the mid 1980’s with a generous donation of seed money from Dr. Ivan Crowell and Canon Hubie Drillon. With that money they bought the equipment and installed it in the basement of the Cathedral Memorial Hall. With close instructions from Dr. Crowell, a small group of dedicated members of the congregation began their little business with the promise to donate $7500 to the Restoration Fund. They were more than successful in their endeavours!

Designs with many motifs borrowed from inside the Cathedral and stained glass windows, were drawn and sent to Saint John where a master mold was prepared of rubber. Then the pewter was melted and cast in Fredericton. Many helpers worked with the designs grinding and polishing them in their homes by hand. It was a dedicated group  that not only helped design and make the ornaments, bookmarks, jewellery and other items but, they also sold the pieces at the back of the Cathedral, at Craft Shows at the University of New Brunswick, at the Delta Hotel and even in St. Andrews NB. Many pieces 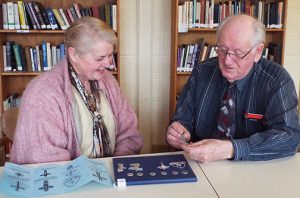 were personally engraved in English, French, Dutch, Greek, German and Chinese, according to the wishes of tourists. This illustrates the wide distribution of the valued pieces from the Pewtersmiths around the world. Many thanks for all the efforts through the years of such a dedicated and successful group.

The president, Charles Davies, has led an interesting and varied life. Born in Quebec City, Canada, his family moved to Wales when he was very young. Educated in England, he spent many years in Guyana. That is where he met his wife, Jean. They were married in 1963. They came to Canada in 1971, expecting to live in Vancouver. However after friends gave them a tour of the Maritimes, they settled in Moncton. In 1985, they moved to Fredericton where Charles sold computers. The Cathedral has become their church home where both Jean and Charles are active members, contributing much to the life of the Cathedral.