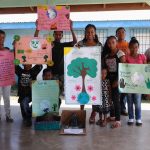 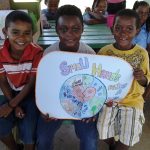 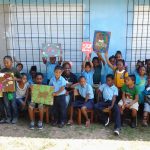 Belize occupies not only a chunk of land in Central America, but also a special spot in the hearts of dozens of people from the cathedral who took part in mission trips there in 2005, 2007, 2010 and 2013.

“Our work as a church is to reach out and serve our brothers and sisters in Christ,” says Beverly Morell who led the four mission teams. “Belize is a wonderful example of one important way we do just that!”

Although a cathedral team has not gone south recently —  largely due to the falling Canadian dollar which made the trip much too expensive — connections between the cathedral and a tiny Anglican parish in Belize continue.

For example, approximately $2,000 is sent annually to help St. Hilda’s Anglican School. It’s an elementary school (pop. 200) in a poor area in western Belize where three of the teams volunteered. The funds pay for school supplies as well as badly needed repairs such as fixing broken toilets and gaping holes in classroom ceilings.

The money for school supplies, including books, printer ink cartridges, paper and coloured pencils, is appreciated by the teachers. For example, it meant that the children had plentiful materials to work with when creating the Earth Day posters pictured here.

Another aspect of the relationship is assistance for higher education. In Belize free education stops at Grade 8. Many families live below the poverty line and cannot afford to send their children to high school. Former missioners and other donors have helped put several St. Hilda’s graduates through high school: Ashley Jones, Amieka Myers, Anfernee Vasquez, Jamal Whitty and Tianney Lamb.

Also thanks to donors from the cathedral family, three students from St. Hilda’s are currently attending high school: Aaliyah Augustine, Paul Jones and Anique Hernandez.  Paul explains why the financial support and encouragement mean so much to him: “I come from a poor family, but I want to show other children like me that it doesn’t matter where you came from, you can still achieve the goal you set your mind on.”

Originally, it cost $700 CDN per year per student, but the decline of our dollar means that it now costs $1,000 CDN annually per student. Although the existing students will be supported until graduation, unfortunately a high school scholarship cannot be offered to a St. Hilda’s graduate in 2016.

A couple years ago other donors at the cathedral kindly pooled resources to send two of the high school graduates to college. Although Anfernee Vasquez dropped out after a year, Amieka Myers intends to graduate with an associate in education certificate in 2017.

“Education is so important for these young people as is a well-equipped school,” says Brad McKnight, treasurer of the cathedral’s Missions Committee. “Our committee is considering a fund-raiser in late fall or early winter to make sure the financial support remains solid well into the future. Stay tuned for news about specific plans and for opportunities to volunteer.”