Christ Church Cathedral offered financial support to the mission to Boston in the spring of 2017. These are some of the reflections of the participants.

When Kyle McGraw signed up for a mission trip to Boston in May, he never dreamed it would get so personal.

But on the last day before leaving Boston, he found himself clippering and shaving the heads of five men who had come in off the street for $1 haircuts. Kyle is not a barber, but he saw that the clothing outreach centre where they were volunteering gave haircuts, and he asked if he could help.

“I’d never shaved anyone before but I said I’d give it a shot,” he said. “The whole week was surreal, but that moment was a highlight. We did a lot of hands-on work but this was extremely hands-on. It got personal really fast.”

Seeing the scars on the men’s heads led to personal questions and candid conversations. And doing the job correctly meant cradling their heads to get the angle right.

“I looked over and he had his hands on this guy’s head,” said Colin McDonald, director of youth and intergenerational ministries in the diocese and one of the leaders on the trip. “It reminded me of washing someone’s feet. It was so intimate. “A lot of people don’t like to touch homeless people.”

The Rev. Dan McMullen had a similar response: “Kyle was putting the most love and care into shaving this guy. He was doing it with so much care.”

It was a pivotal moment in the trip that saw 14 young people and leaders from the diocese pitch in amid the poverty, addiction, mental illness and homelessness the city of Boston deals with daily. In fact, the kids saw things they might never see in New Brunswick.

“We’re all small towners,” said Jessica Gowan, another leader on the trip. “We don’t have a lot of experiences. In Boston every second person walks up to you. Some struggled. We all did, but the point of the trip was to face struggles.”

The group spent each day volunteering at agencies that serve the needs of those at the bottom of the socio-economic ladder. And every evening was spent discussing their day.

“Some of my favourite times were when we were debriefing at the end of the day,” said Jessica. “Seeing how the day impacted our young people.”

“What really moved me was seeing the young people serving hurting people they’d never met and would never meet again,” said Dan. “They were treating these people like they were serving Jesus.”

“Lord, show me the real Boston.”

On the first day, during a tour of Boston to get their bearings, the prayer on Colton Scott’s lips was “Lord, show me the real Boston.” That prayer was answered, and it made Colton, 19, angry. When you want to find them, the addicted, poor, sick, homeless and hopeless are hard to miss — and difficult to accept. “I can’t help them,” said Colton. 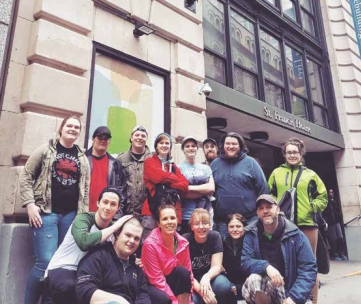 “A sister, a nun who runs the Common Art Program (for people off the street to express their creativity), said ‘let that anger fuel you. You’re right to be angry.’ That stuck with me. It drives me to do more.” Colton came back home with a new-found skill he’s likely to use, since his summer job is in uptown Saint John. “I learned how easy it is to approach people,” he said. “They’re just people. I learned a lot more about myself than I did about Boston.”

During the previous six months, Colin worked with the young people to prepare them spiritually, using Lectio Divina, the ancient practice of reading small passages of scripture repeatedly while asking the Holy Spirit to reveal their meaning. He chose the book of Isaiah, “To answer the question, ‘why do we serve?’ If we are people who claim to follow Christ, we have to act in a similar fashion to him. Jesus quoted Isaiah a lot — feed the hungry, clothe the naked.”

So how did it go? “We knew these words and we saw them played out during the week,” said Colin. “We saw young people step up, be leaders, be engaged in their faith.” Each day, they cleaned, did yard work, pitched in at places that care for the all-but-forgotten of the city, and listened to the stories of despair, and in some cases, redemption — all of which had a profound impact on the kids.

“It was very emotional for them to leave a site, knowing these same people we spent the day with were probably on the streets sleeping, maybe getting arrested that night.” “The next step,” he said, “is to harness the lessons and emotions of the week and put them to work at home.”

“What does it mean here? How do we find opportunities?” he asked.